Lord Sarfraz article in The Independent 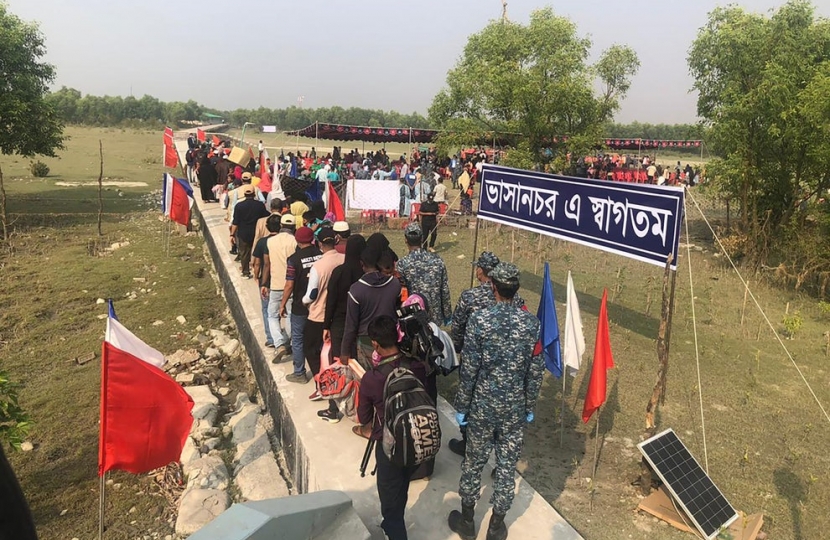 As we begin a new year, we must not forget our commitment to helping the Rohingya

In 2020, that most difficult of years, the UK went the extra mile to demonstrate its support for Myanmar’s beleaguered Muslim minority. The government must not stop now, says Lord Aamer Sarfraz.

While we are into a new year that offers hope, Christmas is still fresh in the memory. Even though this year’s festive period was challenging, at least we were reminded of the high standard of freedom of religion in the UK. Unfortunately that positive picture is not replicated in many countries. It is a horrifying statistic that one in three people around the world suffer from religious persecution. There are few more egregious contemporary examples of group suffering from discrimination than the Rohingya of Myanmar.

Three years ago, around 1 million Rohingya were chased out of their country, with many ending up in Bangladesh. Recently, the Bangladesh government has moved 1,600 to a remote island, Bhasan Char, which has capacity for 100,000. There have been concerns raised about this from human rights groups and I do think the move to the island should be reconsidered. As things stand, the vast majority of the refugees are either in Cox’s Bazar district in Bangladesh (an estimated 860,000) or in Myanmar’s Rakhine state (an estimated 600,000).

The UK has a responsibility towards the Rohingya. Burma was a British colony from 1824 to 1948, and since then, the British have maintained commercial and other ties to this beautiful country. For one, Boris Johnson has recognised the moral imperative to support the Rohingya. After a visit to refugee camps as foreign secretary in 2018, he told Myanmar’s de facto leader, Aung San Suu Kyi, that refugees should be allowed to return to their homes without fear and called for this to be overseen by the UN refugee agency.

In 2020, that most difficult of years, the UK went the extra mile to demonstrate its support for the beleaguered Rohingya. In January, the government welcomed the decision of the International Court of Justice for Myanmar to strengthen its efforts to safeguard the Rohingya. But the government has done more than issue warm words and idealistic statements. It has shown its teeth by prohibiting two senior Myanmar generals associated with human rights abuses from entering the UK or using UK banks (the so-called “Magnitsky” sanctions regime). Then in October, the UK co-hosted a donor conference with the US, EU and UNHCR, which pledged a further $600m (£432.7m) of aid. This adds to the total of $2.8bn (£2bn) that has been donated by the UK and the international community since violence broke out in August 2017.

The government’s concern for protecting the rights of a Muslim minority is part of a wider picture of securing the liberty of religious minorities. It commissioned a report on the persecution of Christians by the Bishop of Truro, published last year. This revealed that an average of 250 Christians around the world were killed every month for their faith, and has made a series of recommendations for the government to use its diplomatic leverage to pressure foreign governments.

As we start a new year, I think there are three areas for the government, and the wider international community, to focus on in their support for the Rohingya. First, just last month, Myanmar held elections, the second time they had done so after decades of military rule. Aung San Suu Kyi’s party has emerged victorious. While the holding of elections marks a significant progress, it is still a notable deficiency that the Rohingya did not get to vote. This needs to be examined for future elections.

Secondly, the conditions in the refugee camps are very cramped and difficult, particularly for vulnerable members of the community, women and children. There is a generation of younger Rohingya who are not receiving a school education. Without this, they will lose hope.

Furthermore there are reports of rape and sexual assault in the camps. The situation has been exacerbated not only by Covid but also the challenging weather. One year ago, a heavy monsoon caused havoc in the camps in southern Bangladesh. Just three months ago, as an indication of their desperation, 300 Rohingya refugees were found to have landed in Indonesia, after fleeing and being at sea for six months.

Thirdly, the UK and others need to help deal with Covid-19 in the cramped refugee camps in Bangladesh. At the Cox’s Bazar refugee camp, the UK is financing the building of isolation and treatment centres, which will consist of 600 beds to treat refugees who fall unwell from the pandemic. This is a significant step in addressing the virus in the densely populated camps. It is a microcosm of tackling the pandemic in Bangladesh, where over 370,000 cases have been reported and it is spreading quickly.

In the House of Lords, earlier this month, I sought assurance from the Foreign Office that they will continue to give humanitarian support, including distribution of a Covid vaccine to Rohingya refugees. The UK government and pharmaceutical industry has been at the forefront of developing vaccines for Covid. We can be proud of the UK’s longstanding and major support of Gavi, the Vaccine Alliance, which will ensure that Covid vaccines are equitably distributed around the world. In Cox’s Bazar, there have previously been successful large-scale diphtheria and cholera vaccination campaigns, so the basic distribution infrastructure and know-how exists, though Covid vaccine specific cool chain requirements do not.

As a generous-hearted nation, we should continue to support those in dire need overseas alongside supporting our own population. While the UK government may have suspended its 0.7 per cent target on overseas aid, this does not mean that we will abandon our moral obligations to those in need overseas. All the not-for-profits on the ground that I've spoken to working with Rohingyas, have been very positive on the role that UK aid has played thus far, and for this, we should be proud. Even while we are forced to temporarily cut our aid budget to 0.5 per cent, our work on the ground will continue to have critical impact.

The Christmas period encouraged us to think of the vulnerable, distressed and marginalised, and we should all spare a thought for the Rohingya and recommit to supporting their cause in 2021.

Lord Sarfraz is a businessman and philanthropist. He took his seat in the House of Lords in September 2020