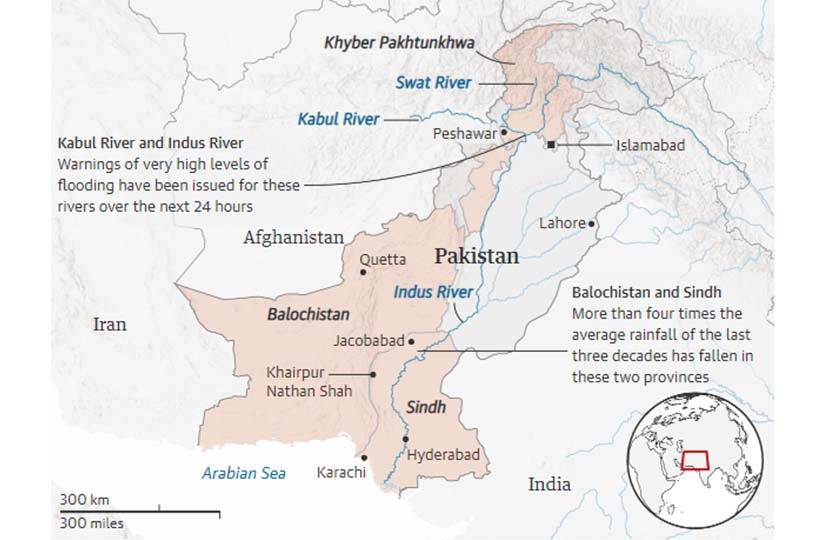 Pakistan is not to blame for a climate crisis-fuelled disaster that has flooded much of the country, the prime minister has said, as he made a desperate plea for international help in what he said was the “toughest moment” in the nation’s history.

“We are suffering from it but it is not our fault at all,” Shehbaz Sharif told journalists on Tuesday afternoon at a press conference where his climate change minister referred to the flooding as a “climate catastrophe”.

“We are dealing with a situation I have not seen in my life,” Sharif said. “More than one million houses are damaged or destroyed. Seventy-two districts of Pakistan are in calamity and all four corners of Pakistan are underwater and more than 3,500km [2,175 miles] of roads have been washed away. Around one million animals have died.

“It is the toughest movement in the history of Pakistan. He has never seen such floods in his life … Now I say without fear, I have not seen such devastation in my life,” he said. “We request the international community to come and help us and stand by us at this hour.” The floods had caused up to $10bn (£8.5bn) in damage, he said, adding that there would be transparency on all assistance funds donated.

Sherry Rehman, Pakistan’s climate change minister, said towns had become “oceans and rivers” but, due to climate heating, she expected the country to go straight into a drought in upcoming weeks. “We are on the front of unfolding climate catastrophe.”

Rehman said Pakistan was responsible for less than 1% of global greenhouse gas emissions. “Our footprint is so small … There are countries that have got to become rich on the back of fossil fuels and let’s be honest about this,” she said. “Now the time has to come to make a change and we all have a role to play but they have a greater role in this climate catastrophe.”

At the same press conference, Ahsan Iqbal, the planning and development minister, said: “People are enjoying their lives in the west but someone here is paying the price.”

The UN secretary general, António Guterres, warned that Pakistan was facing a “monsoon on steroids” as the government issued more flood warnings for the next 24 hours.

Heavy rains over two months have caused the nation’s worst flooding in more than a decade.

Guterres said on Tuesday that south Asia was a hotspot for the climate crisis and the catastrophic flooding in Pakistan that had left tens of millions needing help was a warning to every nation of the destruction wreaked by human-caused global heating.

“The Pakistani people are facing a monsoon on steroids – the relentless impact of epochal levels of rain and flooding,” he said. “It breaks my heart to see these generous people suffering so much.” The UN has issued an urgent appeal for $160m to provide help.

“People living in these [climate crisis] hotspots are 15 times more likely to die from climate impacts,” Guterres said. “As we continue to see more and more extreme weather events around the world, it is outrageous that climate action is being put on the back burner, putting all of us, everywhere, in growing danger.”

In Pakistan, the Balochistan and Sindh provinces have had more than four times the average rainfall of the last three decades.

Majid Ali Bughio, 30, left his home town in Sindh with 20 extended family members in the early morning on Monday after they heard of breaches in a nearby embankment.

Bughio said by telephone that he had advised his family to go towards Karachi, as many parts of the Dadu and Badin districts were under water. “We need rations, food, medicines and emergency help from the Sindh government and the government must help us to vacate. We have been left on our own,” he said. “More than 70% of the population in the [wider city of Khairpur Nathan Shah] have left. The shops and all bazaars are deserted and many villages are underwater.”

The flash floods have affected more than 33 million people, officials said. The National Disaster Management Authority on Monday said the death toll from the monsoon rains and floods in Pakistan had reached 1,136 – with 75 killed in the previous 24 hours.

In an immediate warning issued on Tuesday, Pakistan’s Flood Forecasting Division said that over the next 24 hours a very high level of flooding was likely to continue in the Kabul River, which flows into Pakistan’s Indus River.

The Indus highway in Sindh was submerged under two feet of water. The highway connects Sindh with the Punjab and Balochistan provinces.

A video shared by residents showed a coach that had slipped on the highway while water was flowing and authorities were involved in the rescue of passengers. Local people said there were no casualties.

The local media reported a rise in waterborne diseases in Sindh and other parts of Pakistan. In some parts of Sindh there had been a 100% increase in diseases.

The flooding has washed away bridges, roads, houses, livestock and people across the country.

Gul Hasan, 38, in Khairpur Nathan Shah, had sent his three children and wife to upper parts of Sindh, while he stayed in his home town. He said: “I did not leave because after some of my neighbours had left yesterday, people barged into their houses and stole their belongings.

“This is so sad at this hour of calamity we are witnessing such issues. I will leave my home town after I leave the luggage and other stuff on the rooftop and water comes to the city completely and I know that now no one can steal our decades of savings.”

Aamer Sarfraz, a Conservative member of the British House of Lords, said on Tuesday that he was in Pakistan seeing the “devastating effects of the floods first-hand”.

“I hope our government significantly increases financial support for humanitarian relief immediately. I know it’s summer recess and we have the distraction of a leadership contest – but this really can’t wait. This is the moment to step up, like we have done in the past.”

… we have a small favour to ask. Millions are turning to the Guardian for open, independent, quality news every day, and readers in 180 countries around the world now support us financially.

We believe everyone deserves access to information that’s grounded in science and truth, and analysis rooted in authority and integrity. That’s why we made a different choice: to keep our reporting open for all readers, regardless of where they live or what they can afford to pay. This means more people can be better informed, united, and inspired to take meaningful action.

In these perilous times, a truth-seeking global news organisation like the Guardian is essential. We have no shareholders or billionaire owner, meaning our journalism is free from commercial and political influence – this makes us different. When it’s never been more important, our independence allows us to fearlessly investigate, challenge and expose those in power.

Lord Sarfraz : Tribute to Her Late Majesty The Queen